Anita Peida knows nothing about honoring her mother and father. Born to parents of high class and mass wealth, Anita’s shame to the family name comes via sucking and fucking every white boy she comes across. Her parents, not to be embarrassed, write her out of the Estate thus costing her boat loads of cash. Anita confides in her bff, Chastity Lynn, and the idea of revenge is as clear as the white cocks that will later devastate her body. Anita lost her conservative attire for clothing that would make the jaws of veteran street walkers drop to the floor. The best way to get back at her folks would be to snack on nearly a dozen of the filthiest, most vile guys this side of Anaheim. much like a line at a giant truck rally, the Cumbangers were ready to slam their sausages into the back of Anita’s head until her makeup ran off. Chastity was Anita’s personal cheerleader as each white guy lined up for a chance to fit their meat deep inside her fuck box. In fact, it looked as if the 1976 Celtics were taking liberties with their head cheerleader and the black beauty was loving nearly 9 feet of white kielbasa. The time for ending her parent’s misery arrived when Anita’s face took blast after blast of ball grit and dick snot. Needless to say, her pain was alleviated ten fold. 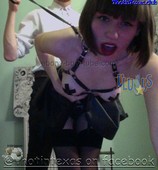